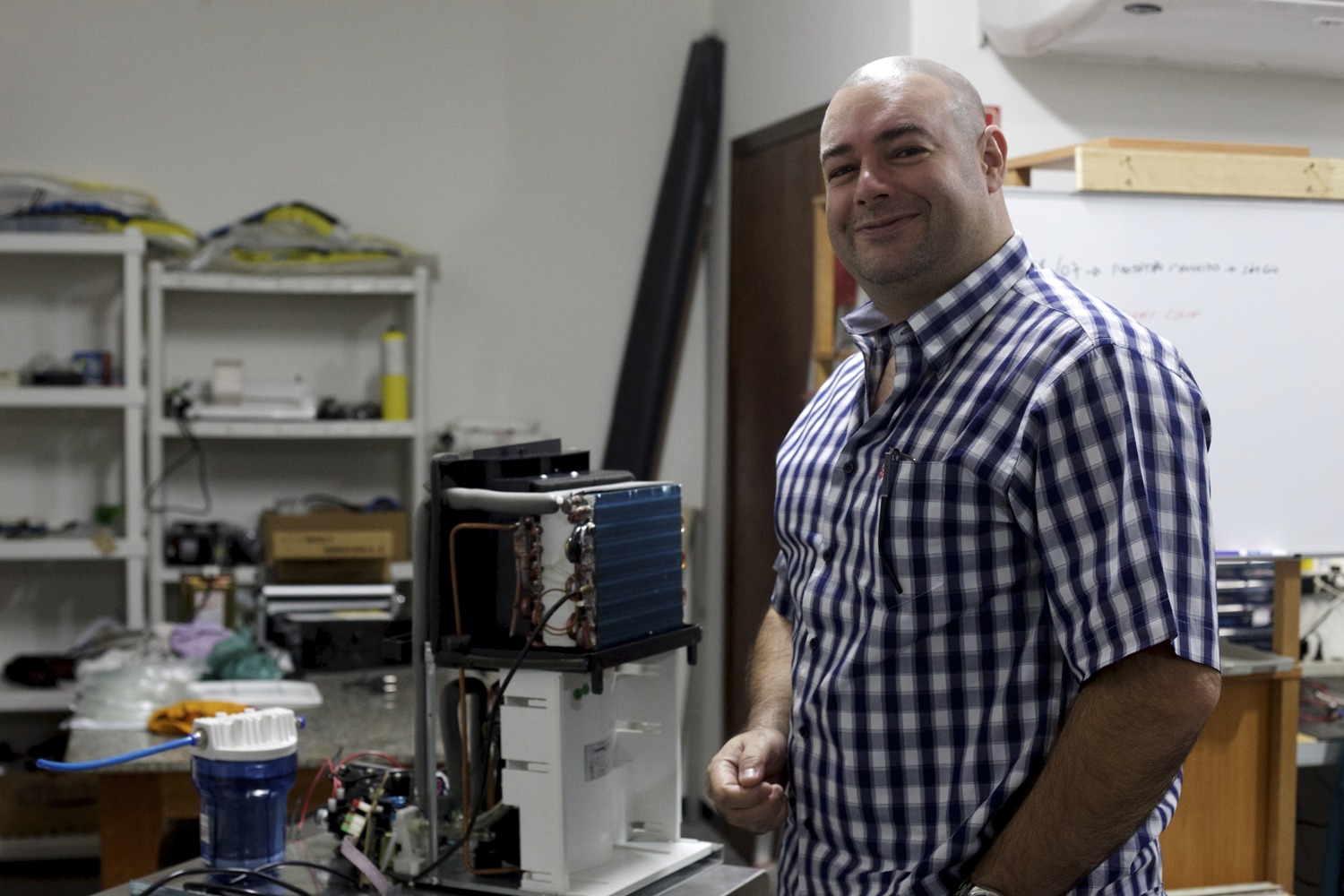 When I first meet Pedro Paulino in his office in Valinhos, 75 miles from São Paulo, he offers me a glass of water. “Here we have it!” he says, holding a seemingly unremarkable drink. The water didn’t come from the tap, however. Pedro pulled it out of thin air.

“Making water like this is easy,” he says, explaining how small machines can harvest moisture in the atmosphere and condense vapor into liquid. The real challenge, he adds, is making the water safe to drink. His startup, Wateair, works to do just that, and as cheaply as possible.

His tinkering comes at a critical time for Brazil, which is facing its worst drought in more than 80 years. Reservoirs are rapidly depleting, and the more than 20 million people packed into São Paulo are facing a “critical” water shortage, state officials said in August. The government is plowing ahead with multimillion-dollar emergency construction projects to replace vanishing supplies. Pedro, meanwhile, races in the opposite direction, scaling down and lowering costs on his existing models.

Pedro’s own life story is closely linked to water — or a lack thereof. He was among the first generation born in Brasilia, the capital city, which was built in 1960 over the harsh, dry savannah. At 17, he left for Madrid to study mechanical engineering and worked as a health care developer for Siemens AG. For the next two decades, he traveled the world searching for technology innovations, including stints in China and Israel, which have long faced water restraints. “Any tech person must think: I have to go where people faced this problem a long time ago,” he says.

When Pedro returned to Brazil, he used his acquired know-how to build his first Wateair in 2009 — just as the forces of nature and poor conservation policies conspired to create devastating water shortages.

Wateair’s technology uses filters to clean the condensed vapor of toxins and add minerals. UV lamps zap any microorganisms or viruses lurking in the water. Machines range in size from a shipping container to that of a refrigerator. Most of Wateair’s existing customers are companies, restaurants, and hospitals that can’t risk running out of water in their buildings. Some are individuals, who are bracing for an extreme crisis.

Eduardo Pistilli bought a USD 12,500 Wateair model in September 2014. He lives in the Copacabana neighborhood of Rio de Janeiro, which hasn’t yet been slammed by the drought but could face similar water problems in the future. The hulking stainless steel Wateair cabinet in his apartment produces 150 liters of water per day. “I used to spend USD 125 a month on water, but now it’s like USD 37 on electricity to power the machine,” the businessman says. “If you need water in a desert, this will do.”

The large, costly machine in Eduardo’s apartment is unlikely to find its way into any of Brazil’s favelas, where it’s most needed. But a cheaper version could reach lower-income neighborhoods in Rio or rural villages in the sertão nordestino, the Brazilian outback. Pedro is working toward a machine no larger than a desktop computer and powered by two solar panels, which will produce 15 liters of water a day and potentially cost around USD 1,750.

The model, still in the works, has smaller filters, pipes, and tanks squeezed inside. The ace in the hole is a sensor that scans the water and relays data. “This costs roughly USD 250, but here we’ve done it for USD 1,” Pedro says, holding a tiny green board covered with plastic and wires.

The machine’s brain is the result of his research in biology and engineering, but also of his tireless search for a self-sustaining supply chain in Brazil. Instead of importing goods and commodities subjected to fees and currency flows, Pedro chooses local industries — even though he had to teach some suppliers exactly what he wanted. “I’m a nationalist in the country where I am,” he says.

This story has been published in Makeshift Harvest Issue (December/2015).