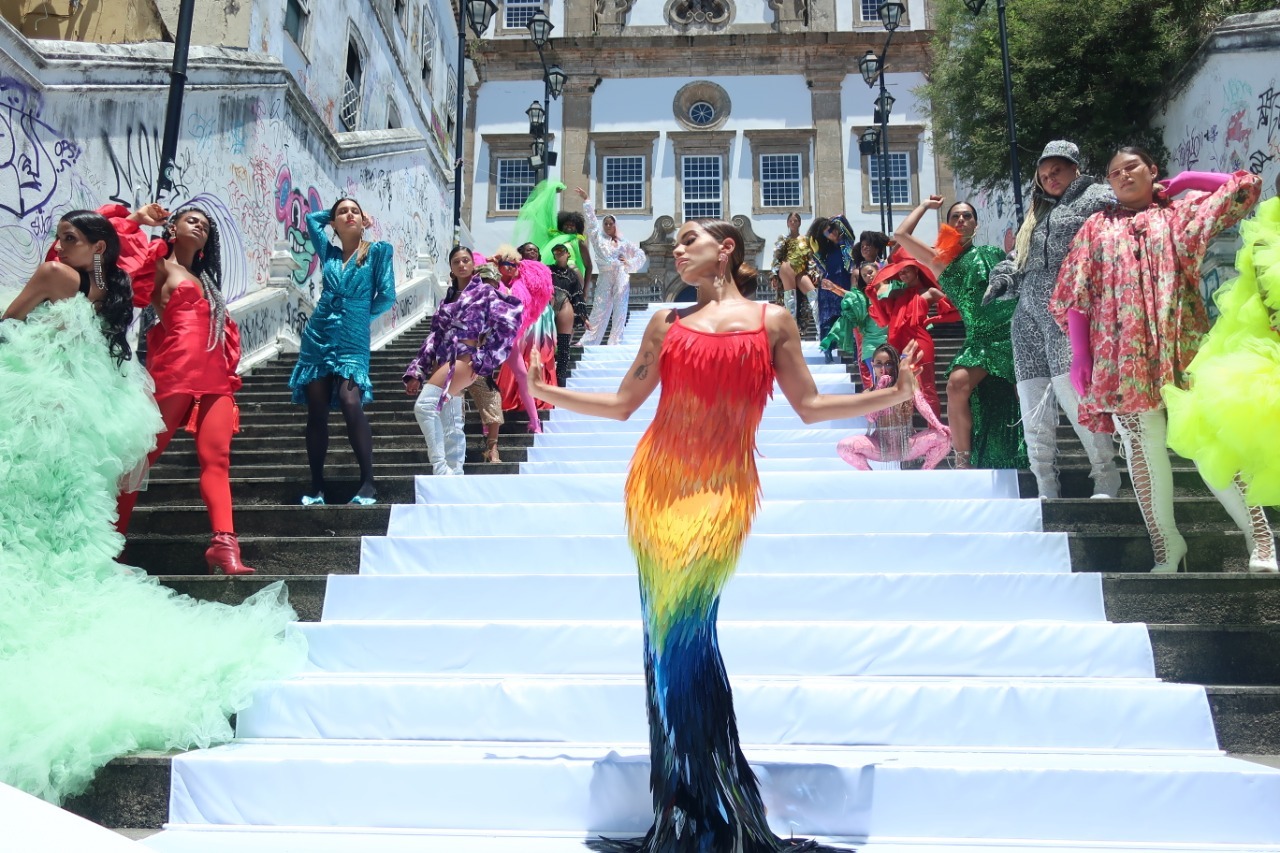 This is a story assignment for Remezcla. It was first published in September 2020.

On “Me Gusta,” Anitta moves baile funk aside to introduce her audience to an original music genre from Bahia.

When the first drum kicks in “Me Gusta,” Anitta’s latest release, a new baile funk-ish theme seems ready to drop. But instead of chanting over the tamborzão rhythmic pattern (baile funk’s musical core), the Brazilian, sided by Cardi B and Myke Towers, brings an indisputable pagodão to center stage.

This languid, sultry yet energetic music genre has been the main soundtrack of Salvador, the capital city of the Brazilian state of Bahia, for the past two decades. It’s a modern evolution of samba forged in one of the richest cultural spots of Brazil, which explains why Anitta shot the music video for this song in Salvador back in February (all the respect to the CGI team who managed to teleport Cardi to Brazil).

In 2019, Anitta started the making of “Me Gusta” along with producer Rafa Dias and guitarist Chibatinha. They are half of ÀTTØØXXÁ, one of the main music acts from Salvador.

In the past few years, the band has revamped pagodão to the Brazilian dance floors with performances flooded with electronic textures, engulfing percussion lines, and electric guitar strums—a feat that has drawn the attention of artists like Diplo. Dias was contacted by the Brazilian pop star just after “Bola Rebola“—also shot in Salvador—was released, in February 2019.

“Our starting point for making ‘Me Gusta’ was our song ‘Elas Gostam‘, with the rhythmics and the electric guitar chords”, Dias tells Remezcla.

Those two elements, a must-have for pagodão, were sliced off so “Me Gusta” would exude that catchy pop flavor. Instead of complex patterns, different drumming accents are watered down throughout the track. And rather than an intricate chord progression (which people from Bahia call the “groove” or the “swing”), Chibatinha plays his electric guitar with spaced upbeat pickings—a heritage from another Bahia street-made music genre, the samba-reggae.

According to Dias, “the idea for ‘Me Gusta’ is to present the music from Bahia to people all over the world and blend it with Latin music as well. The drum kick, for instance, sounds like an arrocha.” This Brazilian sound has strong connections with Central American and Caribbean ones like bachata and reggaeton.

“I have always connected the dots between Brazilian and Latin American music and Anitta is bringing these two worlds together, showing that we may speak different languages, but we’re all Latin American brothers and sisters,” Dias says.

Pagodão itself comes from a long lineage of Afro-Latin music. As a result of more than 300 years of colonial slavery, Salvador was already the city with the largest black population outside of Africa in the 18th century. Just like the old New Orleans was the boiling hotspot for what became the jazz music tree, Salvador has always been a breeder to samba in its different forms—whether it be the ancient umbigada encounters, the samba de roda meetings, or the contemporary pagodão.

“This music is truly a Bahia thing, made by people from underprivileged neighborhoods, listened to by them when they’re having a barbecue, when they’re hanging out on the streets, catching a bus, cleaning their houses, cooking a meal… It’s definitely music made in the kitchens,” percussionist and singer Marcio Victor shares, referring to a Brazilian, mostly Black, tradition of cooking and feasting while playing and dancing to samba.

Marcio Victor, or just MV, is the leader of Psirico, one of the most famous Brazilian pagodão groups. He had already played with the likes of Caetano Veloso and Gilberto Gil when he founded his group in 2002. Throughout the decade, Psirico and other bands from Bahia shaped a sound that was ubiquitous in Salvador’s favelas. Today, it’s part of city life.

“Pagodão is also a movement, a lifestyle, a dance style… and it links up with hip-hop [and] trap music,” he explains. “It’s not just a rhythm, it’s a thing many other favelas around the world can relate to.”

With Anitta’s song—and a noticeable push by Cardi B’s featuring—MV also hopes that more Brazilian people will start to listen to pagodão. Regional prejudice and xenophobia still tint the cultural exchanges between the southern and the north-eastern regions of Brazil, where Bahia is located.

It is undeniable that the latter has always been an important source of music novelties to Brazil—and Anitta’s not the only Brazilian artist who’s aware of that: Pabllo Vittar’s last hit, “Parabéns,” features MV. Just as there wouldn’t be hip-hop without Jamaica, there wouldn’t be Brazilian music without Bahia.

“Today Anitta is the forward of a team, like Neymar, so her song should be celebrated, and it’s a victory for Rafa Dias and Chibatinha that feels like my own,”, MV says. “If we weren’t going through a global pandemic, I’d throw a street party with a trio elétrico after this release!”

Trio elétrico is a sound system and truck often seen in the Salvador carnival street parties, an enormous machine that resembles Bad Bunny’s itinerant performance in NYC. Indeed, having the takes of the all-female percussive band Banda Didá, the stunning alleys of Salvador downtown, and the Jorge Amado Foundation facade, a trio elétrico featuring the trio Anitta, Cardi B, and Myke Towers would be the final baiano touch to the “Me Gusta” video. Maybe in next year’s carnival?