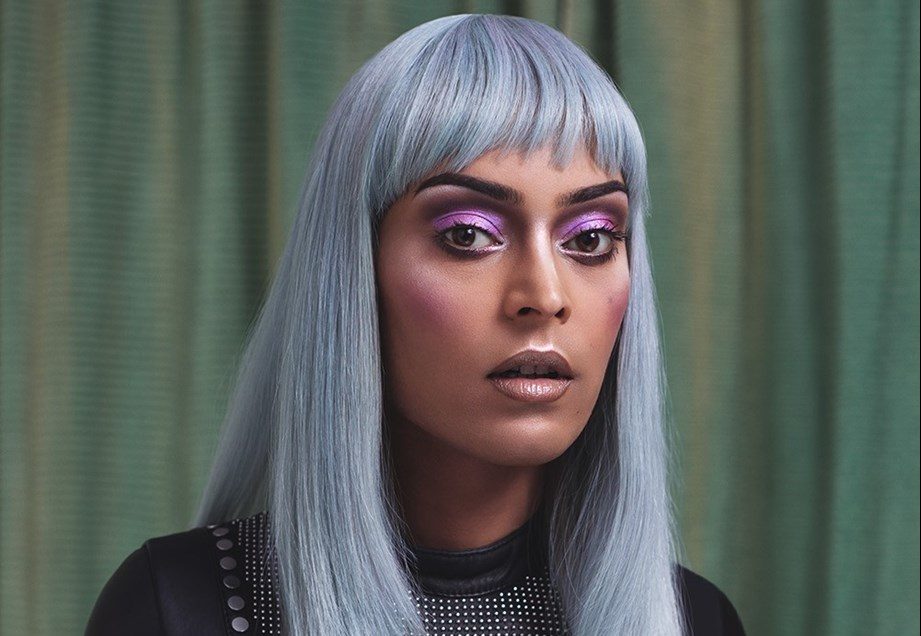 This piece is an assignment for The Correspondent. It was first published in October 2019, after being edited by Eliza Anyangwe and Kate Kingsford.

From behind her niqab, eyelashes are all you can see of Asifa Lahore at the beginning of her YouTube hit song Punjabi Girl. They’re strikingly long and thick, almost obscuring her kohl-rimmed eyes.

Her song is a parody of Barbie Girl, the one-hit-wonder by 90s group Aqua. In her take on the Eurodance earworm, Lahore alternates between a niqab and a tight mini-dress, singing:

You can’t see my face
The boys, they like to cha-a-ase
My qua-li-fi-cation
Is that I am Asian.

It’s a manifesto against sexism, traditionalism, and discrimination, wrapped up in a joyful performance of comedy and high camp.

Lahore (35) became a star after appearing in the documentary Muslim Drag Queens. Today she sings at nightclubs, performs for gay pride events, and makes guest appearances on television shows. She’s developed her own style: “Some people thought it was amazing, progressive, inclusive, but other people thought it was offensive,” says Lahore.

The singer has recently transitioned to become a woman, coming out publicly as trans on a YouTube video three years ago. Despite her public success, her personal journey wasn’t easy. When Lahore came out to her British-Pakistani family as a gay man, ten years ago, her parents took her to a doctor and then to the mosque as they tried to understand what was happening in her mind and body. Months later, after endless questions and a struggle to overcome their initial judgements, the family finally came to terms with the situation and her new identity.

She has faced plenty of other challenges since. As a vocal and visible gay Muslim man, then as a trans woman, she’s become used to online abuse. The comments on her YouTube channel include threats to kick her head in or publicly shame her. The danger is real; she keeps the police informed of where she is at all times.

Add to repressive legislation the fact that in many parts of the world, from Brunei to Hungary, as right-wing populist governments come to power, bigotry is also visibly on the rise. At the same time, queer artists in many of these contexts are finding new audiences and success. How are those two phenomena simultaneously true?

Brazil’s queer artists are a source of insight and inspiration. At first glance, Brazilian culture – its colours, sparkle, and flamboyance – would seem naturally welcoming of drag culture. It is where 24-year-old, openly gay singer and drag queen Pabllo Vittar has built an extraordinarily successful career, amassing over nine million Instagram followers and earning a Grammy nomination along the way.

Equally, from a legal perspective, Brazil has adopted progressive legislation, with a high court ruling in May 2019 that discrimination based on sexuality or gender should be criminalised.

Yet, Brazil has one of the highest rates of violence against LGBTQ+ people in the world. In 2018, the year that right-wing president Jair Bolsonaro came to power, at least 420 murders in the country were motivated by homophobia. Bolsonaro himself, a self-declared homophobe, has legitimised popular prejudice in a number of his public statements.

Infographic titled “State sponsored homophobia in 2019”, showing that in 70 UN member states same-sex conduct is illegal. In the 123 UN member states where it is legal, people are still persecuted. Of these states, two examples are highlighted: Brazil, which has the highest murder rate for LGBT+ activists, and Russia, where anti-propaganda laws cut off access to information and counselling for young people.

It is against this backdrop that transgender baile funk singer Mulher Pepita is working her way to the top.

“The rise of a number of queer artists despite the high violence rates against LGBTQ+ people is a good example of how our society works,” Pepita says. “We live in a country with great cultural, ethnic and sexual diversity, but our colonial past is still here. That’s why we need more and more LGBTQ+ and empowered female artists that break the norm, reach the people, and make changes through art.”

Pepita sees herself as being part of that change. In January of this year she published a book and is writing a play about being a transgender person in Brazil. “I am an authentic, positive person, and as a trans woman who speaks out about love and self-esteem in a society that marginalizes trans people, I break barriers.”

The paradox of cultural liberalism and political conservatism is nothing new. Throughout history artistic expression has provided a space where alternatives to the norm can be articulated and transgressions played out. Cross-dressing and cross-gender characters have been part of cultures for millennia, from ancient Greece to Hindu mythology.

One of the reasons that queer artists can succeed in traditional societies is simply because they are artists – because what they do is a performance. Trans singers like Afisa Lahore and Mulher Pepita, who exaggerate the trappings of femininity, with towering heels and heavy make-up, appear larger than life.

“An LGBTQ+ artist might succeed in a conservative context because some audience members might imagine the performer as being outside of their daily life or as simply putting on a persona. In both cases, the audience member can distance themselves from the aspects of the performer they have an issue with,” says Craig Jennex, assistant professor at Ryerson University in Canada and co-editor of Popular Music and the Politics of Hope: Queer and Feminist Interventions.

Jennex explains that on stage the human complexity of the artist is flattened, simplified. The public can see them as an artistic creation, so it becomes easier to suspend any moral judgement.

A camp aesthetic is instrumental in enabling publics to separate the person from the performer. It is exuberantly over the top. Against the backdrop of a rainbow flag, Lahore’s heavy eye makeup under her niqab is camp. So is Prince’s purple suit and ruffled blouse, and Nicki Minaj’s exaggerated voice. It is playful, particularly when it comes to gender norms, deliberately caricaturing icons of masculinity and femininity, and as such putting the individual beyond the moral judgements of the everyday world.

Despite the possibilities to find success, life remains a perpetual balancing act: between the varying demands of being an icon for queer communities and for mainstream audiences; of remaining authentically oneself and embodying a stage persona; of living in the spotlight while constantly on guard.

The internet presents yet another contradiction. Being a public figure on social media opens queer artists up to hate speech and all kinds of online harassment, but it is impossible to reach people without joining platforms like YouTube and Instagram. The online world enables LGBTQ+ performers to find fans and build communities across the globe, finding appreciation and acceptance beyond the restrictions of their own country and culture.

Pepita, for example, makes the most of this opportunity, hosting an Instagram show called Cartas para Pepita (Letters for Pepita). In these frank Q&A sessions, she answers questions about life, sex, and love with her own light touch.

Success, but at what cost?

For all artists, mainstream success comes at a price, and for queer performers that often includes distancing themselves from their roots in queer communities.

Take the Village People. In the late 70s, the group was rooted in gay American culture; one of its members described their first album as “possibly the gayest album ever”.
This Towleroad article explores the Village People’s gay iconography.But the success that catapulted them into the mainstream saw them reconstruct their image to make themselves more acceptable to what was still a largely homophobic public. By the early 80s, they had stopped responding to questions about their sexuality.

Still, the fate of the Village People does not represent a complete erasure of their queer identity but a transformation of it. The group embraced leather culture, which had been a common feature of gay style in some communities since the 50s. While the group became less overtly “gay”, the look remained and entered other cultural spheres, like heavy metal. The pressure of conservatism does not erode the impact of queer artists but transforms it, allowing their aesthetic to enter the mainstream unnoticed.

Societal change can be slow, and on occasion – as in this moment – it can move in the wrong direction. Still, from Britain to Brazil, performance enables queer artists to survive, even thrive, as they dazzle the audience with camp and use the reach of the internet to talk heart-to-heart with fans across the world.

“I believe that speaking gently about problems is something that helps us to overcome them,” says Pepita. “This has made my show reach not only LGBTQ+ people but also heterosexual women and men of all ages.”