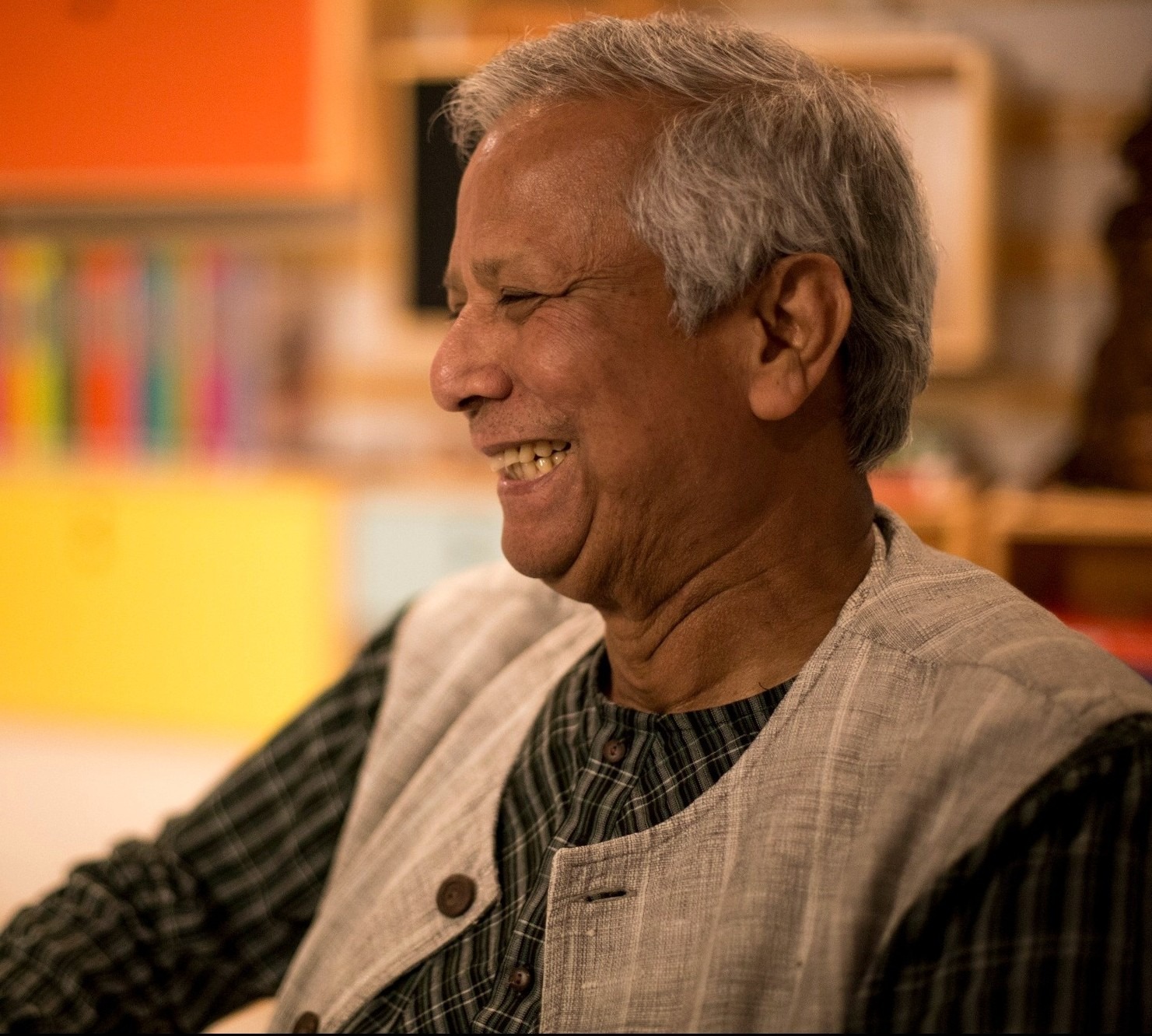 Among all impossible fictions, the complete elimination of poverty is the one that is closest to reality for Muhammad Yunus. “We are so preoccupied with making money that we are not paying attention to the world,” he told me during a conversation in São Paulo. “We must redefine everything; bring poverty down to zero.”

Yunus was the winner of the Nobel Peace Prize in 2006. The 75-year-old Yunus is the father of microcredit, the practice of lending small amounts of money to people living in extreme poverty. Beginning in a small village in Bangladesh, the method aided in the reduction of poverty in the south Asian country. It was formalized under the name Grameen Bank. Yunus calls the concept a “social business”—one that “operates for the benefit of addressing social needs that enable societies to function more efficiently.”

“In charity, money goes out and never comes back. In social business, the money comes and goes,” he said.

With an almost blind faith, the economist sees technology as a panacea. Cellphones can be vital allies for the maintenance of public health, and platforms such as Google and Facebook can be reinvented towards less money-grubbing oriented goals. “It’s like a car. It doesn’t go where it wants to. The driver is the one who guides it,” he said. “If he wants to go up a mountain, the car will do it; if he wants to go by the sea, the car will do it. The concentration of income will increase if technology continues to serve the rich and powerful.”

According to Yunus, we need to relearn how to use technology to combat poverty. And the best way to transform our knowledge is to heed to the lessons contained in works of fiction such as Star Trek and Star Wars. The economist believes that the genre is fundamental to shape what we think when it comes to the future global socioeconomic model. For him, those fantastic histories show paths we can choose to follow, and in the case of dystopian tales such as Blade Runner and District 9, the chaos caused by bad technological habits serves as a warning. “Those movies do a good job by alerting us to what could happen,” he says. “Science fiction is always followed by reality.”

Motherboard: When did the idea for Grameen Bank and microcredit came up?
Muhammad Yunus: Those ideas arose when I made it back to Bangladesh after completing my PhD in America. Bangladesh had just become independent in 1971 and I decided to return. I came back in 1972. I started teaching at one of the universities over there and there was poverty all around. It all happened at the university’s doorstep, so every day I went up to those people to talk to them and find out if I could do anything to make their lives better at least for a day.

I took lots of small actions. That’s when I realized that there were loan sharks roaming the villages. They exploited the poor. Then I thought: I can solve this, I’ll lend my own cash to these people so they won’t have to go to those loan sharks. I started giving out loans in 1976. That went well and then I created a bank from it, Grameen Bank. In 1983 we became a proper bank.

Why are most of your clients female?
Yes, most of the people taking loans from us are women. We have 8.5 million clients and 97 percent of those are women, which is to say that, virtually, all of our clients are female. Right off the bat we decided, back in 1976, that at least half of the people taking loans had to be women.Traditional Bangladeshi banks wouldn’t loan women any cash. So we changed that: In my program, I said at the time, we need to be sure that women are going to have access to loans.

It took us six years to reach a rate of 50 perfect, and then we observed that the money going into the family through the woman brought more benefits than the money that went through the man. When we realized this, we decided to leave that fifty-fifty rate on the side to focus exclusively on women. By concentrating on women, we gradually arrived at 97 percent of women in our client base. [Editor’s note: There is some research that shows that men often still control the loan, even if it’s nominally taken out by a woman.]

“The crisis was built inside the capitalist system. We need to redefine it through technology.” Why are we still living in a crisis?
It’s not something that happened suddenly, it’s something embedded in it. If you returned to normal after that crisis, I’d say we’d be expecting the next one. We’ll always be going towards a bigger crisis. That’s why I say we need to redefine the system. The system has a pre-established stream, which leads to income inequality. All the income is concentrated on the top. On the hands of few people. People below it have nothing. A whole lot of people in the base have nothing to do with that.

Half of the world’s population holds 1 percent of the world’s wealth, 99 percent of this wealth is in the hands of people at the top, and 85 people in the world own half of the global wealth. That economy has created poverty, income inequality, public health issues, slums, tensions and conflicts. We need to redefine the system so it works the other way around—instead of going up, the wealth has to come down so that people can, finally, be independent and so that inequality starts to diminish more and more.

Do we need to redefine capitalism?
We need to—or this system won’t work. This system has been generating pollution and many environmental problems to the planet. The world’s going to blow up because we don’t take care of it. We are so preoccupied with making money that we don’t pay attention to it. We need to redefine everything, bring poverty down to zero. No one in the world should be poor. And the next step is to reduce unemployment to zero. No one in the whole world should be unemployed. There’s nothing wrong with people. The system is the one responsible for creating that artificial and unnecessary unemployment. And, finally, we must bring carbon emissions to a zero. That way the planet will be balanced. All these zeros are reachable and we can work to make them happen.

And what can we do to bring the world to a balance?
The world can be altered with the current technology. There’s a whole new world on the way. If you went back 20 years in time to try and foresee all that would happen in 2015, you wouldn’t be able to. But it all did happen! If you try to foresee what’ll happen in 2035, you won’t be able to do it. There are so many relevant changes happening right now we can’t imagine them. The younger generations will be responsible for those changes. Young people have all technology on their hands. They are very powerful. My generation has never had that power. I describe the current generation as the most powerful in history. The question is, with that much power, what will you do? If you won’t decide for what that power will be used, it’ll go to waste. This generation needs a slap on the face. Wake up! You’ve got the power! You have Aladdin’s lamp sitting on your hands. You can do whatever you want.

The first thing young people need to do is imagine what they want in the world 20 years from now. You, young ones, have to imagine what you want to do for the next 20 years. It’s life’s primetime. Define, think, list it—that’s what we want, what we’d like to have, what we dream. Not what you know how to do, but what you dream of doing.

We’re moving so fast that the impossible is becoming possible real quick. Things that wouldn’t happen before happen now. You don’t have to wait for the government to do something. Don’t expect for them to do it, don’t expect for older people to do it. The past generation has never had that power, so, if you look at them, they can’t help.

In the current structure, human beings have been interpreted wrongly. They’ve been interpreted as selfish beings, money-makers, robots. Humans aren’t selfish, money-makers, or robots. Humans are great entities. They can do whatever they want, but they need to find out the least selfish part of them and bring it to the surface. Want to find the least selfish part of you? Come up with a social business to solve a problem we see on the planet. And then let’s make it happen. We’re creative enough to do it. It’s not a question of resources. Imagination is 80 percent of the job.

Many gigantic companies such as Google and Microsoft hold the key to technologies and platforms we use regularly. How do we bring that power to people? Do we have to avoid those technologies?
Avoiding them isn’t necessary. Remember: Google didn’t fall down from the skies! It was someone just like you. He didn’t have everything. It was created by a young man. He created something technological and wanted to make money with it. If you want to do a social business, you’ll create it in an entirely different way to solve the world’s problem without all those dollar signs in front of your eyes. Anyone can create a Google. Anyone can create a Facebook. Anyone can create anything. The point is what you want from that technology.

This interview has been condensed and edited. It was translated from Motherboard Brazil by Thiago “Índio” Silva. It has been published in Motherboard US (May/2015).