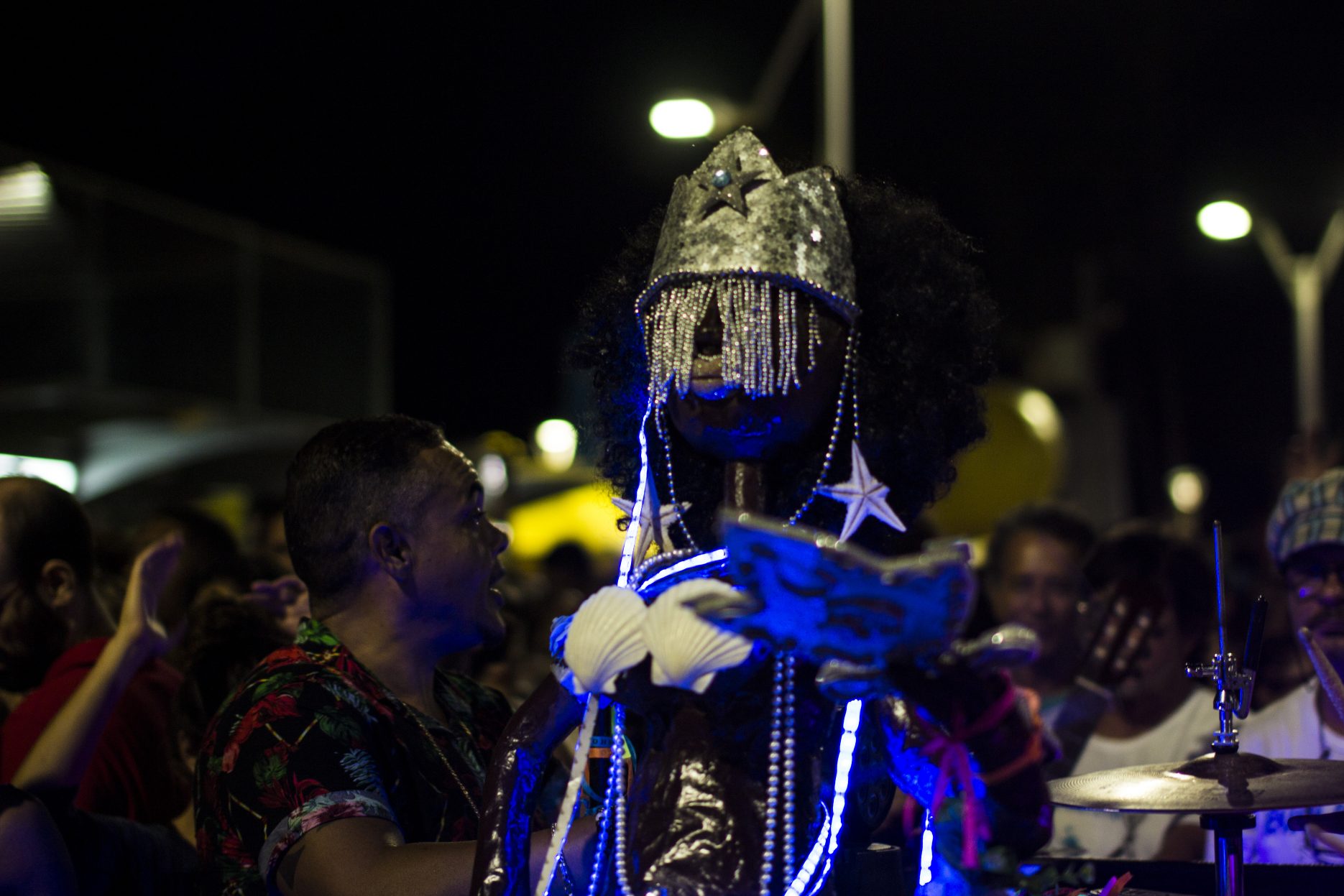 This is a story assignment for Remezcla. It was first published in May 2019.

Bahia’s capital city, Salvador, in Brazil, has one of the largest Black populations outside of Africa. Yet, lemanjá – a mermaid queen with a blue dress and a seashell crown (often depicted as a white female) – is one of the most prevalent local symbols. lemanjá is amongst the main deities of African and Afro-Brazilian religions which originated in or spread throughout Brazil when the first African slaves were brought ashore in the 16th century. Since then, Salvador has developed into a major metropolis where the duality of worshiping lemanjá and the country’s overwhelming Christianity coexist. The city’s culture is embedded in the opposing realities of the sacred and the profane, racism and struggle, poverty and wealth, tradition and modernity – engaging local artists into creating a movement of their own: Bahia Afrofuturism.

“In Salvador, we see the future in the representations of the past, so you are the future because you can keep the present renewed: the ancestrality is the future,” says Russo Passapusso, the lead singer and creative mind behind BaianaSystem. The band was born in 2009 and has become one of the main exponents of Brazilian music in the past few years. Layering Jamaican music into patterns and textures sourced from the black diaspora, Russo Passapusso and his bandmates have carved their place in the Brazilian music scene between the deliberately pop and the strictly alternative. The crowds at their gigs engage in death metal circle pits and West-African stomping, while chanting singing fervently to the band’s tunes.

“In Bahia, we have a strong and powerfully rooted identity and we cannot get rid of it.”

I first met Russo when he was toasting as an MC for the local sound system MiniStereo Público. It was lemanja Day, a century-old celebration that takes place every February 2nd at Rio Vermelho beach, in Salvador.

Huge crowds pay homage to the sea goddess all day and night. Tents are put up on the sand as shelter for practitioners of candomblé and umbanda religions, who play songs on powerful percussion assemblies – a fundamental atmosphere for the singing and dancing that allows worshippers to become possessed by orishas. Marching percussion bands from different backgrounds – from black power blocos afroto folkloric maracatu – move back and forth in the streets. Clubs and bars such as Multiespaço Lalá set up stages where DJs, rappers and other musicians throw concerts while mobile sound systems pass through the massive crowd. It is a particular techno-organic atmosphere filled with a Latin-American cacophony amongst the night flares or the unmerciful sunlight that strikes Salvador. “In Bahia, we have a strong and powerfully rooted identity, and we cannot get rid of it,” says Russo. “One day, you will be able to get here floating on a spaceship, but lemanjá will be here as always.”

What may seem like the peak of Afrofuturism Baiano is also a part of Carnival. Although lemanjá Day and other religious celebrations aren’t officially involved with the famous Brazilian street party, locals from Salvador have stretched the festival days into months.

In the 90s, the festival was backed by a corporate partnership that led to the creation of VIP areas and corridors marked by string lines in the streets where people had to pay a generous fee to enter. However, this business model has been undermined by the financial crisis that Brazil has suffered over recent years. “It was a system failure, and the string [that functions as a boundary] had to be dropped because there was no more money left for this kind of party,” says Russo. Moreover, axé music could not renew itself at the same rate it has in the 90s or face the rising of other Brazilian music genres.

“We must look to the future without losing sight of the past and the present, so we must take our references from within instead of taking them from the outside: Afrofuturism comes from this process.”

Axé represents an all-in-one categorization for many Bahia music genres and influences ranging from candomblé rhythmic cycles, to rock guitar. One of these genres has managed to survive and even sneak into the repertoire of the new generation of music makers in Salvador. Pagodão, or pagode baiano, is a modern branch of samba that relies on heavy, full bodied percussion rhythmic patterns and has a strong connection to underprivileged neighborhoods and favelas of Salvador –just like baile funk in Rio or São Paulo. Once the fundamental tone of popular groups such as A Bronkka, Fantasmão or Psirico, this genre was revamped by BaianaSystem and other new artists like Afrocidade and ÀTTØØXXÁ.

“We must look to the future without losing sight of the past and the present, so we must take our references from within instead of taking them from the outside. Afrofuturism comes from this process,” says José Macedo, lead singer of Afrocidade. The bands political and racial lyrics sound like they that could come from a 90s rap-rock band. Yet, these are delivered through dancing riffs and breakdowns made in Bahia. According to Eric Mazzone, drummer and founder of the band, this is a sine qua non for them, even more under the presidency of Jair Bolsonaro.” Afrocidade is a self-defined protest band, and it goes not only against the current government,” says Mazzone. “We are assembling the music from Bahia into a political discourse.”

Not as political as Afrocidade, but deeply connected to pagodão, ÀTTØØXXÁ is a pioneer in bringing together urban sounds from Salvador into samples and loops triggered by sequencers and software. But this step into the future was not easy to take. “Back in the days, in 2014, this was crazy because Bahia has a strong percussion music tradition, and it was tough to break through it,” explains Rafa Dias, founder of the band. “But the new generation – the youth who are 15 to 28 years old – they understand what we do.” Touching on influences from Sun-Ra and Buraka Som Sistema, to Janelle Monae and Bomba Estéreo, ÀTTØØXXÁ has become a peculiar musical act in Brazil – making Bahian music meant for the dance floor – or the street, since during this year’s Carnival, the group threw its own street party featuring Major Lazer and Tropkillaz.

Rafa Dias is part of a growing number of electronic music producers and DJs that keep Salvador’s music fresh, whether throwing parties on a regular basis or producing beats for rappers and solo acts. Hiran, a gay Black rapper from the countryside of Bahia, made a buzz in July 2017 when he released his first videoclip, “Choque de Bass,” recorded with an iPhone. Instead of heading to Rio or São Paulo – the usual path for young Brazilian artists – he took a bus to Salvador so he could work alongside music makers and producers from the city. In less than one year, Hiran became friends with Caetano Veloso and has been invited to perform in festivals and events such as the Vogue Annual Ball. “Afrofuturism is present in Bahia because we have many black artists here making music and mixing it with electronic music, with ancient and contemporary elements, each one in their own way,” affirms Hiran while mentioning some female artists amongst them such as Xênia França, Luedji Luna and Larissa Luz. “We’re making new things while bringing the ancestral elements and the blackness together with us, and this is real.”

As Hiran points out, if all those artists are not a single, cohesive movement, they are not far from sharing aesthetic and discursive elements in their music either. Bahia holds an alternative modernity where traditions are revisited, ethnic and political issues invite you to dance and fight, and digital technology may be just a gimmick. “We need to decolonize the idea of Afrofuturism,” defends Russo. This principle is fiercely opposed to the idea of a Black Rome – one of Salvador’s nicknames that goes back centuries – when its numerous black communities and ethnic groups struggled to survive under the slavery system. In Bahia Afrofuturism, this exotic, outsider gaze has no place.