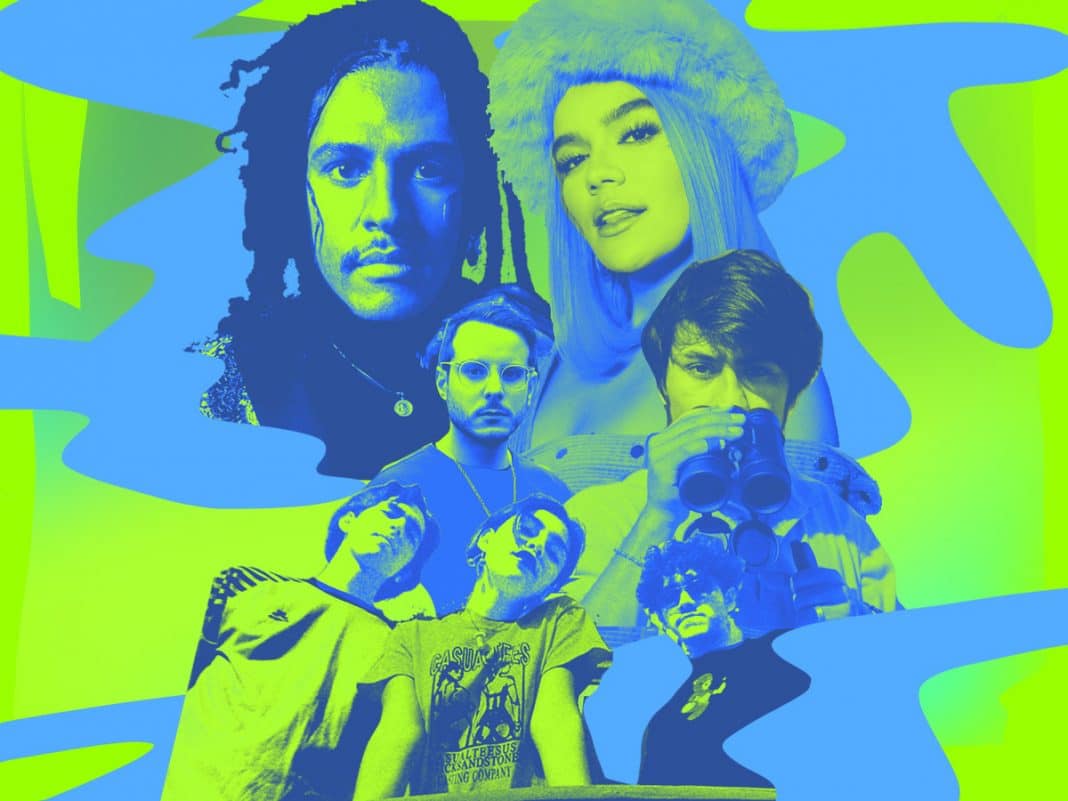 This is part of a series of blurbs and music reviews published weekly on Remezcla New Music section. Follow the subtitle’s hyperlinks to check all the lists published in March 2021.

This song was first released by Brazilian soulman Di Melo in 1975 as a tetrical, tango-esque intermezzo for an album filled with joyful tracks. Julia’s version strips out the original arrangement, but doesn’t lose density. She rebuilds that tense atmosphere with her breezy voice and cyclical chord progressions, just like a clock. The tale of a city—the Conformópolis ruled by the unbearable sameness of labor—becomes a modern tale of many cities where working is the only consistent thing throughout the pandemic. It’s gloomy; a raw portrait that makes sense even years after its first release.

As she sings “Saudade,” Rachel Reis sounds far from being a fresh-faced artist with barely three singles released. She masters her voice like an experienced singer, avoiding mannerisms or excessive ornaments while chanting on a sweet spot between chest and head voices. When the track’s washy dembow beat encounters the slowed-down pagodão bridge, you know the vocal smoothened shifting melodies are also within the music heart—the rhythm. The high-pitched Caribbean guitar lines close the mix and make the song the right choice for every summer-Sunday-morning playlist. (Brazilian people love to brag the word saudade only exists in Portuguese, but, truth be told, the saudade’s bittersweet nostalgia feeling is universal.)

Noname has provided enough proof of her singular ability as a rapper since her 2016 mixtape, Telephone. Playing out with prose, poetry and hip hop—like a velvet-voiced wit juggler—she keeps on showing how to sort out micro and macro woes in the space of a beat. “Rainforest” takes off as a warming bossa nova that would fit just fine in the elevator soundtrack. But it takes no more than 8 bars until the 29-year-old rapper goes back and forth between lovesickness to rage against millionaires. “Rainforest” is a melancholic manifesto with aftertaste: when hard times come and melancholy takes over, the revolution urges.

When Leall broke through with the single “Cachorrada” in mid-2019, it’s very likely that Brazil’s hip-hop lead players trembled. It was then that the Rio de Janeiro young rapper announced that 2020’s reckless favela stories could be told with aesthetics way beyond trap music. His new album, Esculpido a Machado, assures those clues were for real. “Duas Pistolas” is the EP’s second song—the first track being a ruthless preface on the violent daily lives of black youth in Rio, an echo to Brazilian rap masterpiece Sobrevivendo no Inferno (1997). Like a young soldier engulfed by drug wars in the marvelous city Leall rhymes over the spooky, wobbling beat assembled by Diigo. Vivid colors for real times.

“Nós” means “we” in Portuguese, and Elza Soares’ latest release perfectly represents a collective effort put together throughout the decades. Composed by Tião Carvalho, a major keeper of northern Brazilian folklore, the song was first recorded in 1988 by singer Ná Ozetti. “Nós” only became famous twelve years later due to the raspy acoustic interpretation of Cassia Eller, one of the latest Brazilian rockstars. Facing the future, but keeping an eye on the rear mirror, Elza Soares and producer Rafael Ramos decided to bring to life their own intent. What they’ve accomplished is a modulated-synth, unusual samba-waltz overruled by the almighty voice of 90-year-old Elza, a living legend of Brazilian music.

With just one single released, Bando À Flor da Pele can already claim a seat at the table of big indie bands from Brazil like Orquestra Imperial, Academia da Berlinda or Fino Coletivo. It’s not a matter of members quorum: it’s a feeling, a mood. They’ve done that with keys’ interchanging dialogs, upbeat chords and the cheery persistent phrases of “Feira Jacobina.” The lyrics are about a trip between the small cities of Feira de Santana and Jacobina. Evoking Tito Puente’s standards and smoothy salsoul orchestrations, the song reassures that young newcomers in Brazilian music like Bando À Flor da Pele also see themselves as Latine music-makers.

Manoel Cordeiro is a guitar hero of carimbó, a genre made up of Afro-Caribbean melodies and flavored allegories rooted in the Amazon rainforest. Staying true to this traditional kind of Brazilian music, he joins forces with Marlon Sette in new single “Pupunha com Mel.” Together, they play a question-response game where Manuel frets his guitar in captivating circular lines and Marlon reveals a compelling solo voice on a short-range set of notes. If you feel like dancing along throughout the track’s two minutes, don’t worry—this is carimbó, it does that to everyone.

A few years ago, forró—a set of cultural practices from secular traditions in Brazilian Northeast—gave birth to a new electronic strain: the pisadinha (or piseiro), a music genre loaded with punchy drum rolls, catchy keyboard phrases and brokenhearted lyrics. This is the foundation of Duda Beat’s new single, “Meu Pisêro,” as she keeps making her way through the ranks of Brazilian pop. Once again, Duda plays with sounds embodied in popular culture while fusing contemporary timbres, from PC music melodies to bleached hyperpop. The music video, a heavily-saturated tribute to horror cinema, is the icing on the cake of a delightful song.

Dolores Dala Guardiã do Alívio, Rico Dalasam’s second album, is his rite of passage from upcoming young rapper to resourceful hip-hop artist. In 2016, the artist found his way in a rather original (for Brazil) blend of personal writings and journey through modern social issues—while keeping an indefectible, danceable ambiance. In “Mudou como?” Dalasam does that with dexterity. He trims verses with inside rhymes and blends straight forward lines easily while playing with different flows and vocal intensities. Chibatinha’s ethereal guitar, alongside Mahal Pita’s sparkly piano lines and production sustains Dalasam’s profound cry about real love and daily life struggles.

Fluxo Neblina is a baile funk study. Anthropologist and musician Meno Del Picchia has joined forces with saxophonist Thiago França to mold an utterly odd simulacrum of the tracks that fuels the fluxos—street parties where baile funk set the tone in São Paulo favelas. Whilst the beat is delivered on a blend of shrilling percurted chords and conga’s pattern, França’s alto sax draws contrasting lines with quirky angles. You won’t expect to listen to this song at a baile funk party and yet music purists would raise eyebrows listening to it. “Fluxo Neblina” is an offspring that connects Sun-Ra’s free aesthetics to rebel, dark baile funk.