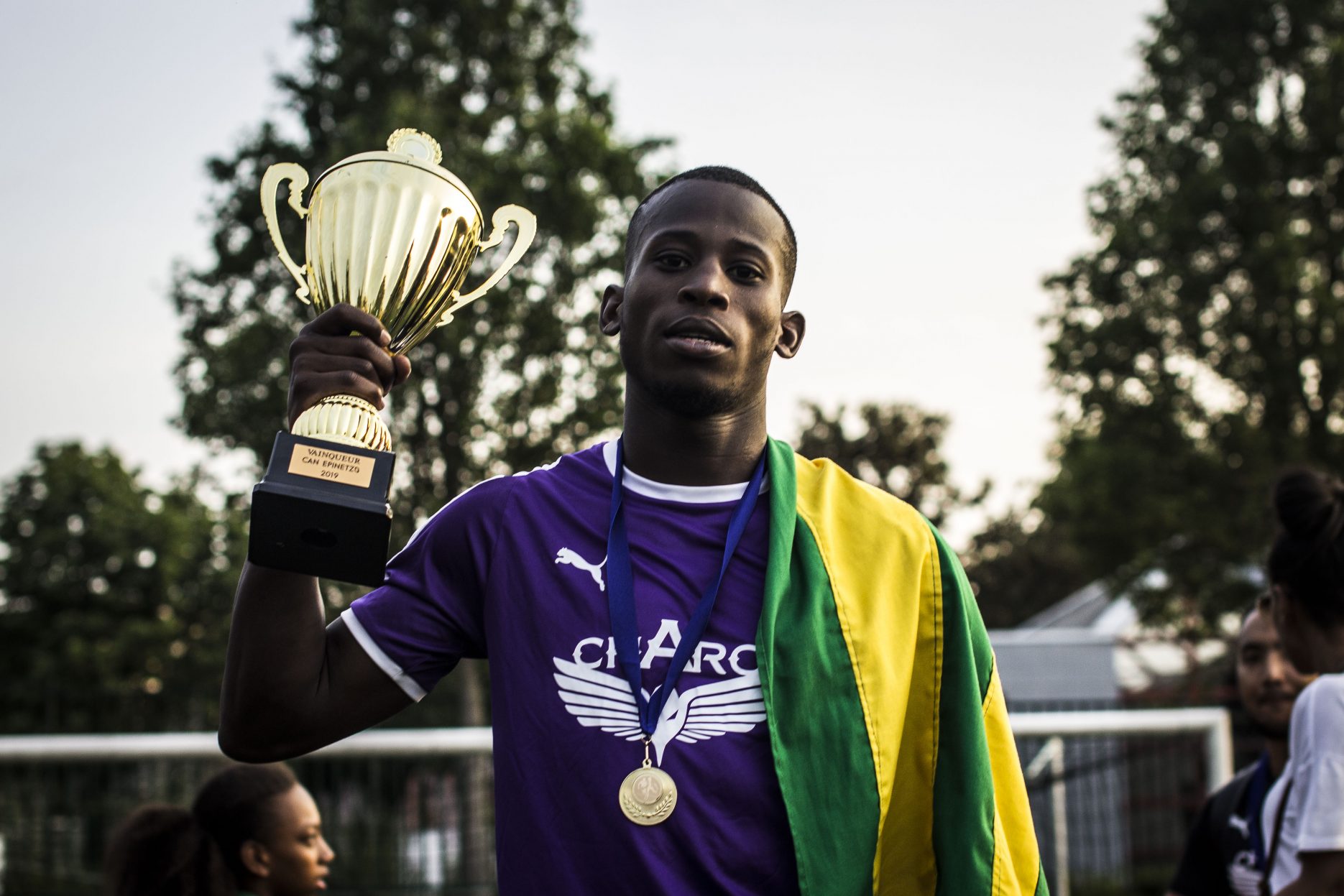 This is a story assignment for African Argument. It was first published in July 2019.

Paris was still mourning France’s loss to the US in 2019 Women’s World Cup that Sunday, 30 June. Some hope of victory, however, was found far from the Parc des Princes, the stadium where the game had been held two days earlier. In Évry, a district in the outskirts of the capital, another football game would be held soon. The European heatwave was warming up the public housing walls when John Nkomb, a 25 year-old French-Cameroonian player woke up with one thought in mind: “We will win it”. A modestly experienced athlete, Nkomb would not say that out loud until the end of the CAN-Epinetzo final match.

Inspired by the African Cup of Nations, this football championship is an amateur competition that takes place people in the Évry neighbourhood. It was founded by a Malian football enthusiast, Moussa Nimaga. The players are a mixed bag from former (semi)professional footballers to recent high school graduates to middle-aged men who play with their wife and kids cheering alongside the pitch. The only criteria is being of African descent and resident in the neighbourhood. Most players were born in France or have lived there since they were children. The competition initially was only meant to be a weekend pastime. There is no prize for winning. Only pride and bragging rights. And a modest trophy.

“This tournament is amazing, it brings us all in the ‘hood together just like a family. There are no borders,” explained Yacine Abed, an Algerian player in the tournament and an Evry native.

Nkomb was playing for the RDM team against Mali, for the title of winner.

He has played professionally in the French football leagues with Paris Saint Germain and Bastia FC, but the CAN-Epinetzo final and the tournament meant more than just playing football. He recently suffered an injury and was out of a footballing contract. According to him, playing in the tournament was a way to recover amongst friends, partake in a celebration that even his big club games couldn’t match. In many ways, playing the tournament was also the continuation of a year-long ritual. He grew up in Evry and has played all his life on the pitch – the Jean-Moulin stadium – where the tournament final was taking place. He learnt how to play football in child programmes managed by Évry Football Club, a low level divisions team in national league.

“Every kid who ever played football dreams to be a pro,” said Samuel Tristan, RDM’s coach. “Some of the players you see here have been enrolled in training programs in professional teams, but eventually they quit, so this is more about bringing people together.”

On that day of the final, the grandstands of the stadium was full of 1,000-1,500 cheering fans. The mood was set by groups of kids with portable boomboxes and young men with automobile sound systems with music blaring loudly out of them. By the pitch sideline, children gathered around a ball or hidden between grown-ups’ legs, teenagers dressed in Adidas or Nike tracksuits chatting about the holidays. National flags were raised and waved. Heavy drums were banged at intervals. Flares were torched lighting the sky.

The tournament and indeed the fans – of varied descent and allegiance – were a fine portrait of contemporary French society: a multi-ethnic palette that dates back to the first mass migration movements after World War II and the decolonisation wars in the 20th century. Africa plays a key role in this context according to the most recent French census. Almost half of migrants living in France at the beginning of 2010 were born in African countries, a number that represented a quarter of the total amount in the 1970s. Rent prices in downtown areas of cities like Paris or Lyon are not affordable for families or individuals looking for new life opportunities. Thus, suburbs became a home for many black people. In Évry, migrants represent 25% of the population, a figure that does not include French citizens whose parents or grandparents were born abroad.

If movies such as La Haine are a compelling illustration of this living mixture of the 1990s’ banlieues (the French word for suburbs), football updated it and brought it to the main pitch. Many French players who won the last Men’s World Cup, such as Kylian Mbappé or Paul Pogba, come from migrant families that settled in France in the past decades. “The Parisian region is a great talent pool”, stated Lambert Mendy, a football scout who accompanied the Senegalese team at the CAN-Epinetzo. Nkomb, who is Cameroonian by descent, has once been called up and played for the national team there. He goes back often because some of his family lives there. He wants to represent his country again.

“This is a personal goal of mine. I would be really proud to do this again.”

Nkomb stepped backwards from the centre of the area to take his penalty kick. He adjusted his balance and kicked with his good leg. Goal. A brilliant performance by the RDM goalkeeper also made sure the opposing team, Mali, missed two penalties. The RDM team was announced the champion of the CAN-Epinetzo 2019, with a final score of 4-2.

Low-cost medals and a simple yet desired trophy were handed to the winners. Some fans celebrated along with the team, waving flags from African countries that are also part of French society. Still, it did not take long for the pitch to be cleared. People headed back home, Sunday was almost over. “Tomorrow it will be a regular day here in Évry,” Nkomb said.

“But now I just want to enjoy with my friends and teammates.”

All photos by the author. The piece was produced in collaboration with Ana Ruiz-Fernandez.